learn about the declaration of independence 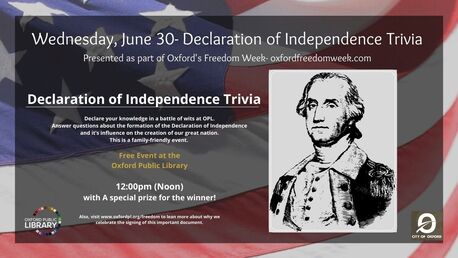 Are you ready to test your knowledge? Join OPL as we play a trivia game together! If you'd like to play in-person, join us on Wednesday, June 30 at 12:00! (Hint....Skybear Confections will be providing some fun prizes!)

If you'd rather play online, follow the link below for a fun quiz made by library staff just for the occasion!
Declaration Trivia
© COPYRIGHT 2017. ALL RIGHTS RESERVED.